The largest rach Gia flight network in the whole industry 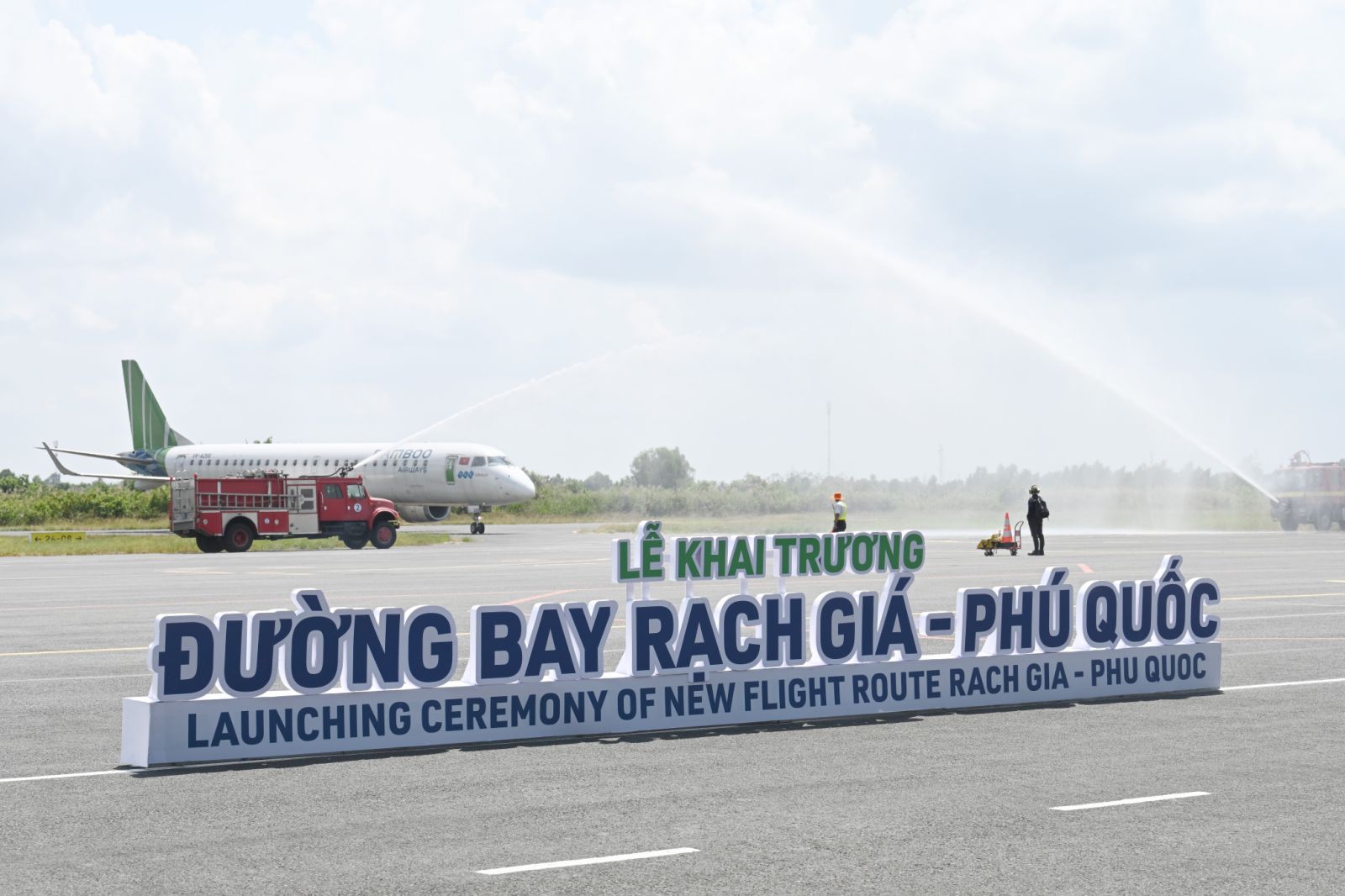 Passengers on Bamboo Airways' special flight to Rach Gia were thanked by the airline's leaders and presented gifts of gratitude on the occasion of the opening of this meaningful route.

Rach Gia – Phu Quoc direct route is operated by Bamboo Airways with a frequency of 3 flights per week on Tuesday, Thursday and Saturday every week. The frequency of exploitation in the latter stage can be adjusted according to the needs of the market and the permission of the authorities.

On the occasion of the opening of the route, Bamboo Airways opened rach Gia – Phu Quoc ticket sales with preferential prices from VND 9,000 per ticket on all official distributions of the airline, in order to thank the large number of passengers who trusted and accompanied Bamboo Airways' flights.

Operated by modern Embraer jet, the Rach Gia – Phu Quoc route operated by Bamboo Airways takes only about 20 minutes of flight, saving significant time compared to traveling by waterway. In the context of the increased tourism demand of the people at the beginning of the year, the aforementioned route is expected to give passengers a variety of travel options and convenient and economical 5-star orientation services. 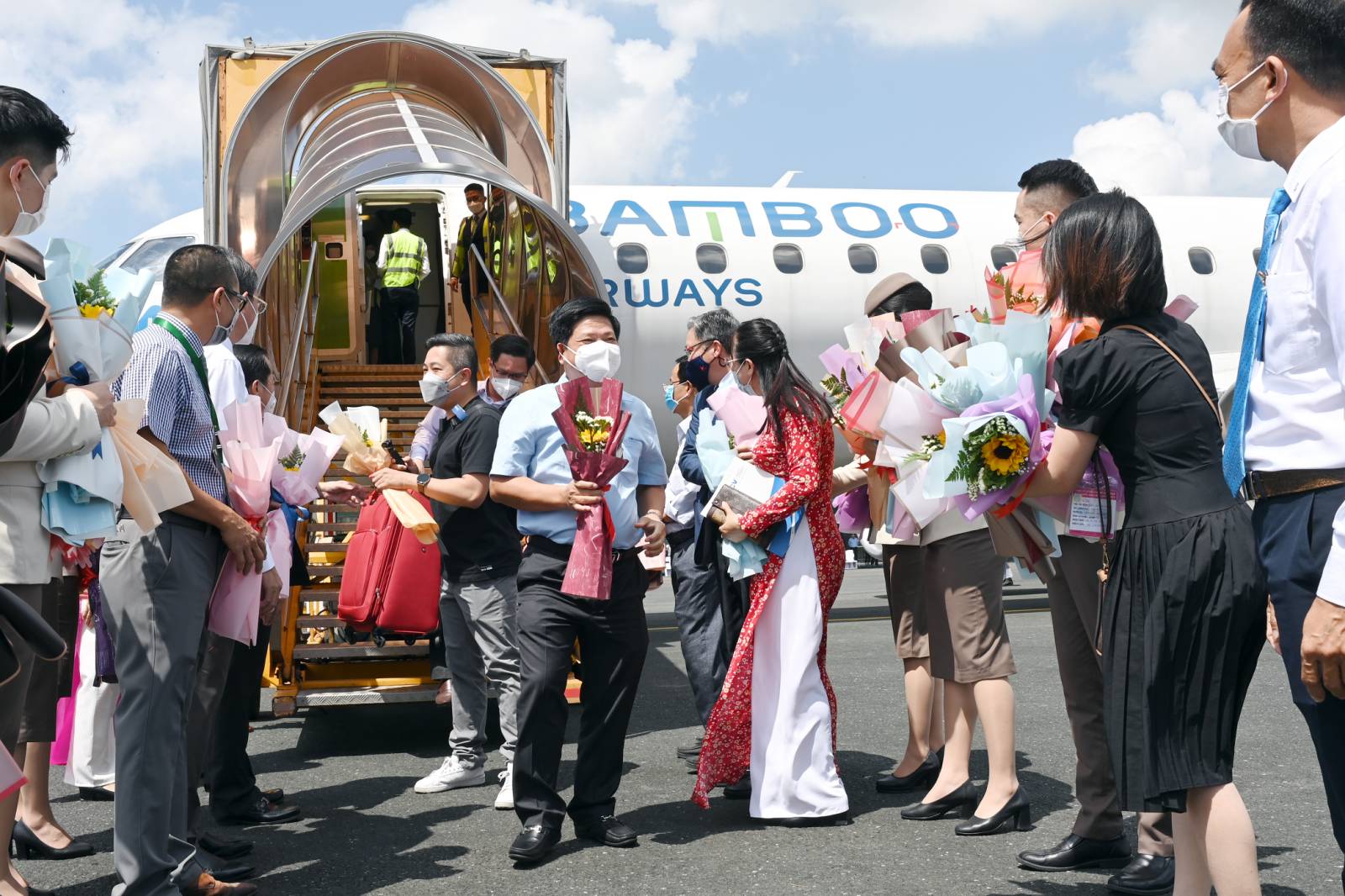 Passengers were thanked and given gifts of gratitude by the leader.

With the operation of the new Rach Gia – Phu Quoc route, Bamboo Airways is the largest operator of Rach Gia connecting network in the whole industry, as well as the only airline designing business class services to and from here, besides the routes connecting to Hanoi, HO CHI MINH CITY. Bamboo Airways said that depending on the actual demand to Rach Gia, the airline will continue to research and promote the frequency of existing routes, as well as develop new routes to serve domestic and foreign tourists.

"Along with the routes connecting Hanoi/HO CHI MINH City and Rach Gia, the new Rach Gia – Phu Quoc route is expected to continue to meet the needs of Kien Giang people and tourists; contributing to strengthening the economic and cultural exchanges in kien Giang's inner region, as well as opening up new opportunities in attracting tourists with both Rach Gia and Phu Quoc cities" said Bamboo Airways Deputy General Director Truong Phuong Thanh.

In recent years, Kien Giang province has actively carried out disease prevention and control, and implemented many solutions to stimulate recovery, creating motivation for the tourism industry to maintain the pace of development. It is known that in order to create economic recovery momentum in the coming time, Kien Giang province will focus on promoting and promoting in all three areas: Attracting investment, exporting and tourism, gradually restoring the international and domestic tourist market, restoring the related service provision activities of the tourism industry. 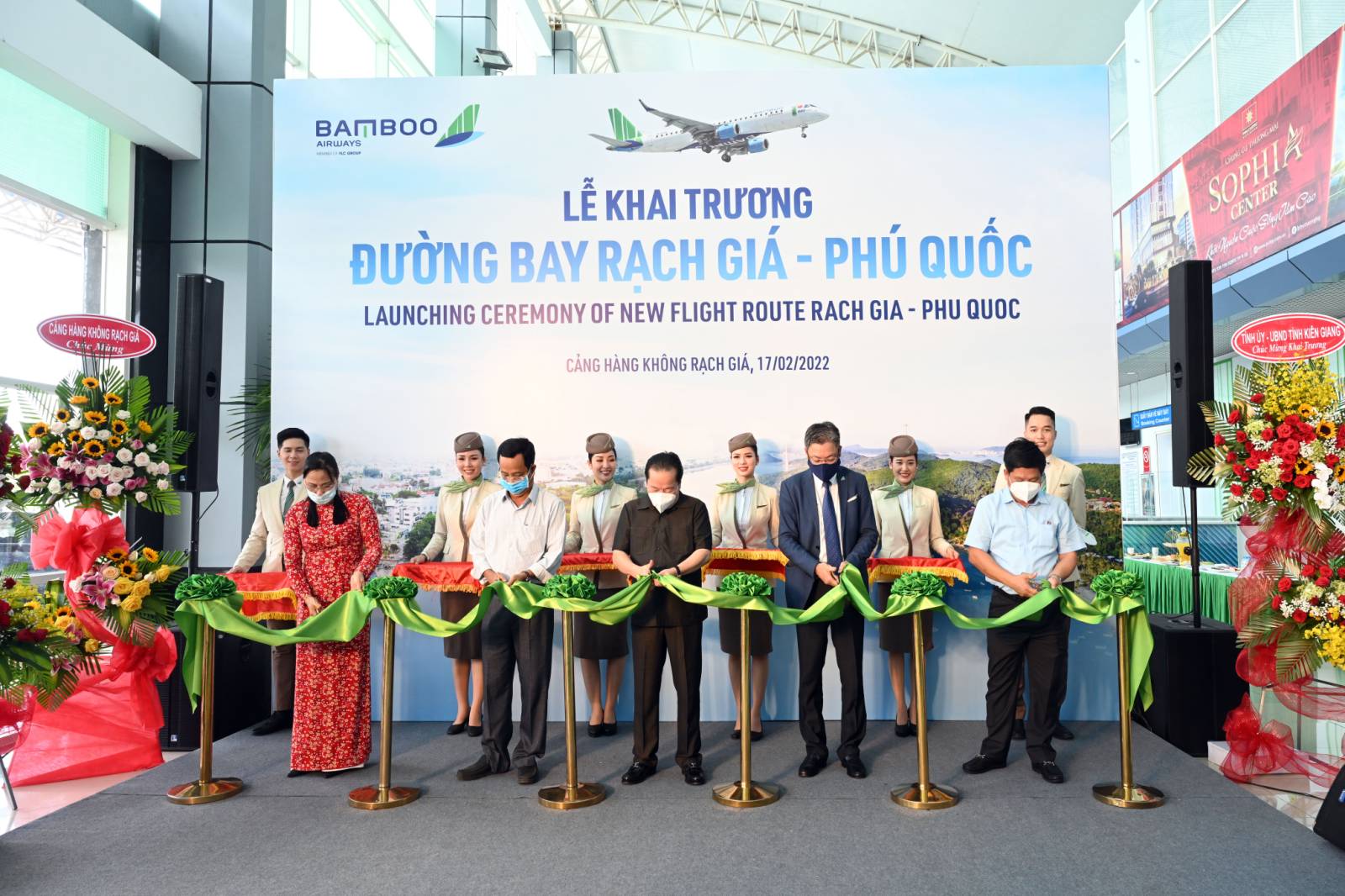 Leaders of Kien Giang province, Leaders of Bamboo Airways and related units cut the ribbon within the framework of the event

Recognizing that tourism and aviation are two industries with close ties, in a relevant information, Mr. Bui Quoc Thai – Director of Kien Giang Provincial Department of Tourism said that local connection with airlines will create more opportunities for recovery, economic development after the Covid-19 pandemic.

"For Kien Giang province, Bamboo Airways' participation through the operation of the route here has contributed to changing air transport activities in the province in a positive way, especially promoting the economy and tourism development. Today, Bamboo Airways operates an intra-provincial route of Rach Gia – Phu Quoc with embraer modern aircraft, creating more favorable conditions for local people and tourists, shortening the time when traveling between the two cities, Mr. Mai Van Huynh, Deputy Secretary of the Provincial Standing Committee, Chairman of the People's Council of Kien Giang province said within the framework of the event.

Bamboo Airways' promotion of operations in Kien Giang is expected to contribute to local support in economic recovery, especially after the effects of the pandemic, thereby contributing to the local economic development.

Previously, the airline has implemented many commercial operations accompanied by synchronous investment in Kien Giang. Specifically, in addition to expanding its network to/from Rach Gia, Bamboo Airways has deployed a network connecting Phu Quoc with key cities such as Hanoi, Ho Chi Minh City, Da Nang and Can Tho. Not stopping there, just before the Lunar New Year 2022, Bamboo Airways also launched a business lounge in Phu Quoc with the goal of not only helping dark passengers. optimize the flight experience but also contribute to improving the quality of air transport services for Phu Quoc.

In addition to increasing the frequency and opening many new routes to meet the needs of passengers, Bamboo Airways still maintains the leading position in the whole industry on time from 2019 to now. In January 2022 alone, Bamboo Airways recorded a punctuality rate of 97.3% – the highest among Vietnamese airlines. The quality of its service is rated positively with the customer satisfaction rate always maintained at 4.5/5.